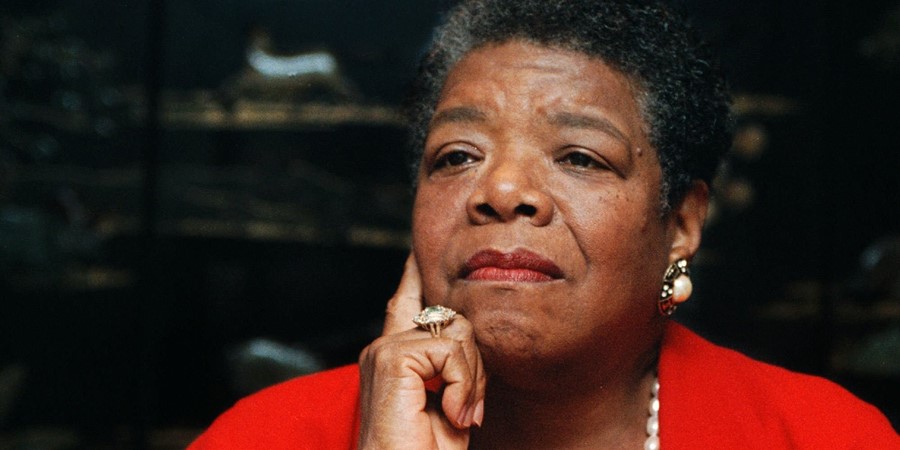 An American poet, memoirist, civil right activist and a singer who published seven autobiographies, several books of poetry and essays which were credited with a long list of movies, television shows and plays, spanning well over 50 years. She lived until the age of 86 years old, passing away in May 28, 2014.

Angelou received numerous awards during her time which included three Grammy’s, the Presidential Medal of Freedom, and over fifty honorary degrees.

Born the daughter of Bailey Johnson and Vivian Baxter Johnson whose father migrated from Trinidad and Tobago as did Angelou’s maternal great grandfather. Her father was a doorman and navy dietitian while her mother worked as a nurse and card dealer. They both had two children; Maya Angelou and her older brother Bailey Jr. but separated when she was only three years old. Her father sent both children to live with their grandmother in Arkansas. They stayed with her for four years until their father appeared again unannounced and took them back to their mother in St. Louis.

It was there that Angelou truly began her journey into the trials and joys of life. At the age of eight, her mother’s boyfriend, Freeman raped her. Angelou told her brother, who informed the rest of the family and Freeman was arrested. He was suddenly freed from jail after just a day, but Angelou’s uncles beat him to death shortly after. Following the traumatising incident, Angelou became mute for about five years. She believed her voice had killed her rapist and felt compelled to stay silent. This short time of silence helped Angelou to develop a sharp memory, increase her observation skills, and birthed her creativity.

In 1959, she moved to New York where she joined the Harlem Writers Guild, where she met several authors and published her work for the first time. In 1960, she met Martin Luther King and began her contributions to the civil rights movement. She was best known for her series known as the seven autobiographies, which was aimed at her childhood and experiences of her early adult life. The first of them, I Know Why the Caged Bird Sings released in the year 1969 was about her life up until the age of 17 that led to her international recognition.

A romantic relationship with Vusumzi Make, a South African freedom fighter, took her to Cairo, where she stayed with Make until their relationship ended. During her time there she wrote for newspapers and magazines such as The Arab Observer, Ghanaian Times, and The African Review.

Whilst in Accra, Angelou met Malcolm X and returned to the U.S. working alongside Martin Luther King again, but both men were assassinated soon after.

She is one of the first African American women who was able to publicly talk about her personal life, inspiring other black female writers to express themselves as central characters in the literature they wrote. Linguist John Mcwhorter saw Maya Angelou as a defender of the black culture which he referred to as the literary embodier of the imperative that dominated in the black scholarship of that era. Another writer named Julian Mayfield” termed the Caged Bird” a work of art that defies description. She also stated that Angelou’s autobiographies set a standard not just for black female writers but also the African-American autobiography writers as well. The Caged Bird according to Als said it is the first time an autobiographer could write about blackness from deep down within her heart without any form of defence or apology. Through her excellent write-ups she became highly recognised and respected as a mouthpiece for women and blacks. Without a doubt, her work has made her America’s most notable black female autobiographer and a major voice of autobiography in her time. As another writer called Gary Younge said ” more than any other writer alive, Angelou’s life is basically her work.

Her books helped increase the writings of black feminists in the 1970s. Her writing also inspired more women to reveal their true selves. Her unapologetic nature freed other writers to open up themselves without any form of shame or thoughts of what the world would say. Another notable individual who goes by the name Joanne M. Braxton said that Caged Bird was the most aesthetically delightful autobiography ever written by an African-American woman in its time. Angelou’s poetry has found its way into modern hip hop music world, including musicians such as Nicki Minaj, Tupac Shakur, Kanye West, and many more.