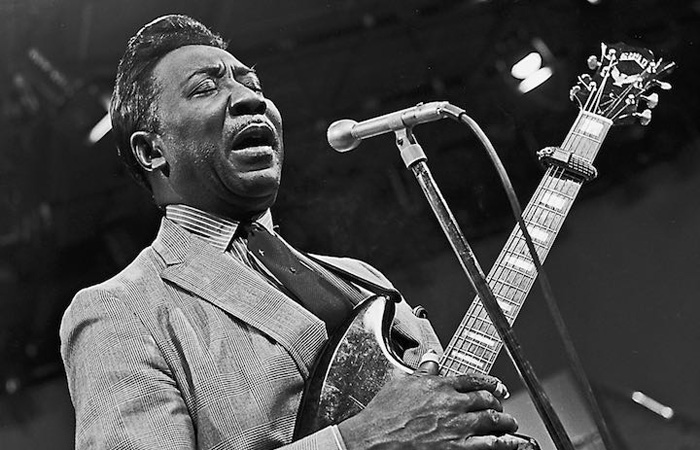 Muddy Waters was the professional name of the American blues singer and songwriter, McKinley Morganfield. He is often called the father of modern Chicago blues. Muddy Waters’ true date of birth is unknown.

Raised by his grandmother Della Grant, following the death of his mother after his birth. She fondly called him ‘Muddy’ when it became clear he liked to play in the muddy plantation, who later as he grew older took a keen interest in music. The introduction to singing started at the baptist church, where Muddy Waters enjoyed singing during service. He learned to play the harmonica and soon bought a guitar. The young Muddy Waters played music on another plantation owned by a colonel and in joints around the town.

His life as a youth revolved around the plantation. He drove a tractor on the plantation where he grew up and on most weekends he used the cabin as a juke house to host parties. The parties were wild with moonshine whiskey, Muddy Waters made himself. He also started to perform solo or with a band at other house parties. This was a source of income for him at the time.

While this talented singer and instrumentalist loved his music, he had to take slow steps to gain the recognition he needed. His first recording was in 1941 by Alan Lomax, an archivist who had come looking for Robert Johnson in Mississippi. Robert Johnson was dead, so Alan Lomax turned to Muddy Walkers for a recording to be used for the U.S Library of Congress. At the end of this fated recording, Alan Lomax sent Muddy Waters two copies of the single. He also included $20. This prompted Muddy Waters to consider his music in a professional way.

He worked more with Alan Lomax and in the years that passed, they put the recordings together as a material called The Complete Plantation Recordings. The material won a Grammy award in 1994.

Meanwhile, prior to this historic award, Muddy Waters moved to Chicago in 1943. He didn’t have much, but he was determined to give his music a chance. Muddy Waters fell slightly to his former lifestyle by driving a truck and working at a paper plant by day. At night he would go from clubs to house parties playing music and trying to make a name for himself. He switched his regular guitar for an electric guitar to add more power and sound to his performance at clubs. Eventually, in 1946 he got the attention of Okeh Studios who took him for a recording but never released the final results.

Thankfully, Muddy Waters got the opportunity to record with Aristocrat Studios. He stuck with them and released most of his hit songs, sometimes using his harmonica, guitar, or voice. He became known in the Chicago Blues scene. His popular songs include I Can’t Be Satisfied, I feel like going home, and Rollin Stone. His career flourished. Muddy Waters died from heart failure in 1983; he was 70 years old.